Update your pastry or bakery

We have many models for your Dough Divider and Rounder

We have several accessories for your Planetary Mixer. Contact us.

Machinery and Equipment for industrial Bakery and Pastry

We produce several accessories for our dough sheeters.

Maquindal – Máquinas Equipamentos para a Indústria Alimentar, Lda, was founded in 1992 by a group of five former employees of the company Fornos e Máquinas Rekena, a market leader for many years and now extinct. Certain of their own abilities, both technical and in relation to market know-how, they decided to create MAQUINDAL, Lda., registered under a deed published on 14 September 1992. The company commenced operations in November of the same year and immediately began to achieve significant productive and commercial success, surpassing 33% of the goals set in the initial project in the 1st full year of activity (1993). 20 years on MAQUINDAL is a national registered brand (registration Nº 288743 INPI) and a benchmark in the bakery and pastry sector. 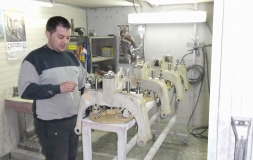 We enlarged the Bakery equipment’s. Now we offer the Bread Grinder wholly produced in stainless steel and available in two models

Need more information about our products?